Day of the dead Mexico City

The day of the dead is around  the corner, the shrines,parades,alebrijes,costumes and pan de muerto are already here, so …are you ready for one of the best Mexican traditions? If not you better hurry, because everything stars this weekend, actually this is what is coming on:

1.Mexicanskulls: Also known as Mexicraneos (in spanish), this exposition shows 53 different skulls by artist from Mexico City, Monterrey, Chihuahua, Durango, Oaxaca and other places like the U.S. and Venezuela. This year the technology will be also involved; two examples of this are the “mapping Ek Balam” the underwold door in the mayan cosmologie and the “mural made of bones” where you will be able to record animated videos. You can find them already at Av. Paseo de la Reforma, from the Angel of the Independence till the Glorite de la Palma. 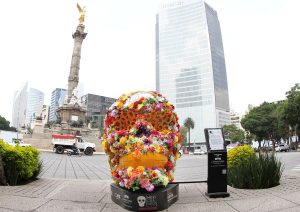 2.Bread of the dead Festival: Pan de muerto, bread of the dead, how ever you want to call it, this delicious bread is ready with its distinctive flavor, typical desert made only during the months of October and November filled up with different ingredients like choclate, Chantilly cream, nut cream and many other, you can try all of them at Huerto Roma Verde, Jalapa 234, Roma Sur, 06760 Cuauhtemoc, CDMX,  This year there will be no plastic used, so please bring your plate and cup . You can also try tlayudas, sopes, tlacloyos, elotes asados, tamales y tacos de canasta, come and get to know all this Mexican snacks. 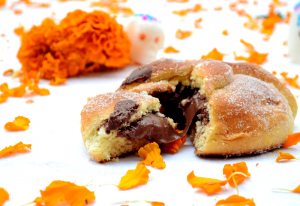 3.The Shrine of the Shrines: As the mexican traditions says, an altar or shrine is to be place so the deceased  can pass from the world of the dead to the world of the living-ones to gather around with their families. And this year the Zocalo will witness , Vladimir Maislin Topete´s work, in which he includes 4 different shrines from 4 different regions of Mexico;  La Huasteca, Mayan Zone, Yaquis poblations and the state of Michoacan. With the 12-meters-high structures that are to be placed in each cardinal point of this esplanade. You can start visiting this Sunday 27th before it goes away on the 11th of November. 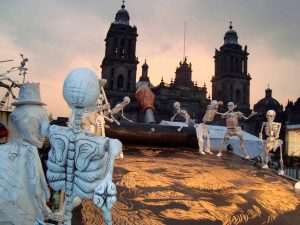 4.Catrina`s Mega-procession: You don´t know what a “Catrina” is? That`s one reason more to come an see this huge parade that will take place at the Zocalo this Saturday 26th. It all started with “La Garbancera” from Jose Guadalupe Posada, and then retaken by Diego Rivera´s mural “Dream of a Sunday Evening at the Central Avenue.”  This parade will star at 18h in the Angel of Independence, heading to the Zocalo, where not only catrinas, but quinceañeras, calaveritas, prehispanics, luchadores, fiancees, mariachis and more that will walk along with you.There will be tons of makeup artist so you can become a “catrin” or “catrina”. And if you can´t come because of your pet, you can also bring them with you as this will be a free and pet-friendly parade. 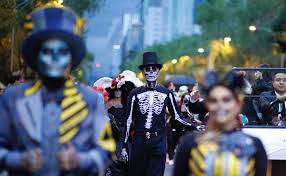 5.International Day of the death Parade: You might have seen this one on Jame´s Bond Spectre movie (how funny? That Spectre comes from Latin Spectrum which meant apparition, an non-physical been… basically what the day of the dead it´s all about) and you´ll be totally right, since it was actually that the very first “Day of the death Parade”. Since then, every year there´s a new topic on each parade, being this year “A gift of chants and flowers” the main topic, divided in 4 smaller groups “Mictlan and syncretism”  , “Skulls Carnival”, “Art and Culture” and “The Party”. Starting at 14h in the Zocalo esplanade , floats, Mojigangas, puppets, and Mega-Catrinas will team up together to receive the expected 2 million participants of this massive parade. 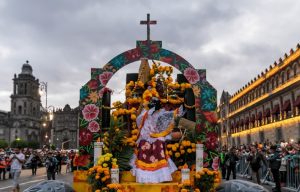