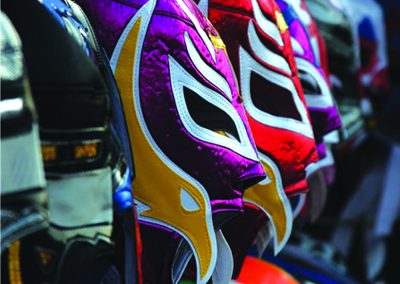 Come to have fun and feel the passion with the best wrestling tour. In this tour you will enjoy the incredible panoramic view on board of the double floor bus with retractable roof (ready to close according to the weather) visiting: “Monumento a la Revolucion”, “Alameda Central”,
“Glorieta de Colón”, “Parroquia de la Sta. Veracruz”. Arriving to “Arena Mexico” you will not only get a free mask and a shot of tequila, also you will live first person and understand the culture of the wrestling art, explained by the guide.

At the beginning of the 20th century, most of the wrestling promotor´s were foreigners, for example the Italian Giovanni Resselech, who organized two wrestling seasons in 1910, another example is the Belgian Constant le Marin, who first made a presentation including a Mexican vs a Romanian wrestler in 1921. With this background and the increasing popularity of this activity, the first wrestling function was made on the “Arena Mexico” in September 21 st of 1933, on the previously called “Arena Modelo”

RECOMENDATIONS AND PASSENGER INDICATIONS
1. Pay attention to the guide’s instructions at all times.
2. Units are not equipped to carry big bags, neither large strollers
3. The abuse of alcoholic beverages will make you lose the right to return in the unit.
4. Inside of the “Arena Mexico” you can buy snacks and drinks

This attraction is included in the Three Day Pass Pass, Five Day Pass and the Fifteen Day Pass.